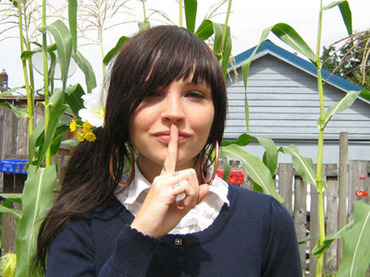 A third self-described anarchist from the Pacific Northwest has been jailed by federal officials for refusing to speak before a secretive grand jury that the accused have called a politically-motivated modern-day witch-hunt.

Leah-Lynn Plante, a mid-20s activist from Seattle, Washington, was ushered out of court by authorities on Wednesday after refusing for a third time to answer questions forced on her by a grand jury — a panel of prosecutors convened to determine if an indictment can be issued for a federal crime.

Plante was one of a handful of people targeted in a series of raids administered by the FBI and the Joint Terrorism Task Force on July 25 of this year which the feds say were in conjunction with an investigation into acts of vandalism that occurred during May Day protests in Seattle nearly two months prior. As part of their probe, search warrants were issued at multiple residences of activists in the area, including Plante’s, demanding that dwellers provide agents with “anti-government or anarchist literature” in their homes and any flags, flag-making material, cell phones, hard drives, address books, and black clothing.

“As if they had taken pointers from Orwell’s 1984, they took books, artwork and other various literature as ‘evidence’ as well as many other personal belongings even though they seemed to know that nobody there was even in Seattle on May Day,” Plante recalls in a post published this week to her Tumblr page.

Only one week after the raid, Neil Fox of the National Lawyers Guild told Seattle Times that raids like this are create a “chilling effect” by going after lawful, constitutionally-allowed private possessions.

“It concerns us any time there are law-enforcement raids that target political literature, First Amendment-protected materials,” Fox said.

This week Plante still maintains her innocence, now she has reason to believe that the raid that has left her suffering from post-traumatic stress syndrome may have been more than an investigation into an activity, but an ideology. Plante says a Freedom of Information Act request she filed in the months after her apartment door was broken down by armed officials reveals that the grand jury investigating her was first convened in March, two months before the vandalism she is being accused of even occurred.

“They are trying to investigate anarchists and persecute them for their beliefs. This is a fishing expedition. This is a witch hunt,” she says this week.

On the day of her third meeting with the grand jury on Wednesday, Plante wrote on her blog that she’d almost certainly be jailed on charges of contempt for refusing once again to testify about herself but said she was willing to face the consequences for exercising her right to remain silent.

“I do not look forward to what inevitably awaits me today, but I accept it,” she writes. “My convictions are unwavering and will not be shaken by their harassment. Today is October 10th, 2012 and I am ready to go to prison.”

Hours later, her Tumblr was updated with a note authored by one of her supporters confirming that Plante “was thrown into prison for civil contempt” after her court date. Plante is now the third anarchist to be imprisoned in the last month for refusing to answer questions about their belief and behavior before a grand jury.

Last month, Plante spoke openly about the grand jury before refusing their questioning for only her second time. “I believe that these hearings are politically motivated,” she wrote in a September 16 statement. “The government wants to use them to collect information that it can use in a campaign of repression. I refuse to have any part of it, I will never answer their questions, I will never speak.”

“While I hate the very idea of prison, I am ready to face it in order to stay true to my personal beliefs. I know that they want to kidnap me and isolate me from my friends and my loved ones in an effort to coerce me to speak. It will not work. I know that if I am taken away, I will not be alone.”

Katherine “KteeO” Olejnik, a fellow anarchist from the Seattle area, was taken into federal custody on September 28 for refusing to cooperate with a grand jury, a decision she said was based on humanity and her First Amendment protections.

“I cannot and will not say something that could greatly harm a person’s life, and providing information that could lead to long term incarceration would be doing that,” Olejnik wrote before being booked. “Icannot and will not be a party to a McCarthyist policy that is asking individuals to condemn each other based on political beliefs.”

On the No Political Repression blog, a support of Olejnik writes that she was prohibited from taking notes during her time on the stand, during which she says she resisted questioning.

Days before her imprisonment began, Matt Duran was also jailed for contempt. According to his attorneys, Duran was not only imprisoned by placed in solitary confinement, denied intimate contact with his lawyer, denied visitor requests forms, personal dietary requirements and sunlight an fresh air.

This entry was posted in Global, News - All and tagged grand juries. Bookmark the permalink.